Alan Sussman believes in the phrase that pays. From his early days creating spots on the AM radio dial to keeping pace with today’s vast array of social media outlets, Sussman is the rare personality that combines a salesman’s bravado with an advertiser’s swagger.

Old school? To be sure. Sussman, president of Sussman/Sikes, the Southfield-based advertising agency, estimates he’s done radio and TV commercials for “just about every single retailer in town at one time or another.” That includes Farmer Jack, Grinnell’s Music, Van Dyke Clothiers, Belle Tire, Crazy Jack’s, Art Van Furniture, Guardian Alarm, and more than 500 hospitals and 12,000 doctors from Michigan and nationwide.

Uber-lawyer Geoffrey Fieger is a client, although his television persona apparently isn’t dependent on Sussman.

Fieger contends, “Geoffrey Fieger conceived the way Geoffrey Fieger is portrayed, and what I do on television. I’m not a piece of clay that he (Sussman) molds.” Fieger insists he and Sussman produce “the most unique spots of any attorney in America.”

So why would Fieger need Sussman? “Well, I like his input, and second of all, I like his style. He’s got a real good touch with filming. He and I understand each other in terms of the way things have to be filmed,” Fieger says. “I like the way he directs me, because he gets me.”

Sussman, who started creating commercials when Lyndon Johnson was in the White House, says he doesn’t plan on retiring anytime soon. A self-professed workaholic, he rarely adds an extra day to weekend trips to a home in Petoskey, where he enjoys cooking for longtime friends.

To capture a steady flow of creative bursts, he jots notes to himself at his office, in his kitchen, and in his car.

And what of Sussman’s office? One wall is floor-to-ceiling glass that overlooks a courtyard and garden that belies the work that goes on inside. Two other walls showcase some of his extensive art collection. The fourth? Well, it’s an extension of his desk, piled to near-tipping with files and his ever-present notes. “I like to keep my files close to me and have no use for a hard drive. And when I write, I like to feel the notes I’m making. My desk is its own universe — but I know where everything is.”

If he didn’t have his brand-building agency, Sussman says he’s not sure what he would do. “I don’t have people in my life that don’t understand that this isn’t going to be an easy ride for them. So whomever I’ve ever been with has had to share me with a mistress, and that mistress is my business,” he says. “My clients get used to me being there. It’s an all-in business.”

If he had to come up with a commercial about his own life, he says the opening would be of a horse race. “The bell ringing and the gate opening. It’s a race for me. I’m trying to win every day,” Sussman says. “One of the great things about being a salesman is you are on your own. You get a chance to ring the bell every day. You get a chance to beat that number, to make your living or not. I love that adrenaline rush. You have to be that warhorse.” 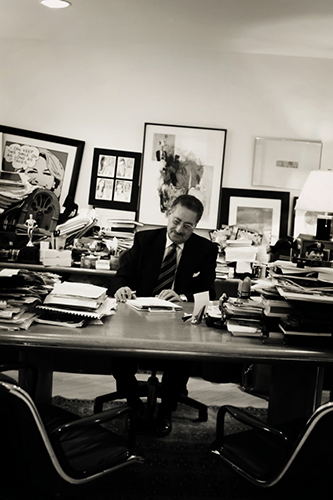 While most people his age are slowing down, Sussman says he’s at a career stride he couldn’t dream about as a young man.

“You are talking to people who are at the apex of their business — passionate beyond belief. I have to meet that passion head-on, equally, or be more passionate. I have to bring that to the game every day and so do the people in this place. People hire us to win. It’s not a vague job description. We came here to beat the other guy and get our client to be No. 1.”

That desire, a background in the recording industry, and his street smarts have paid off. Last year, one of the company’s best years on record, the 24-person Sussman/Sikes agency, complete with its own recording studio, created, produced, and placed more than $50 million worth of media buys. The Sikes in Sussman/Sikes is his longtime business partner, Diana Sikes, who is no longer with the firm. Sussman keeps her name in the agency’s title, however, “because after 27 years, she earned it. Plus, I’m her biggest fan.”

Sussman’s contributions to advertising include an ability to redefine the focus of a client’s industry. Case in point? “He made eyeglasses something that you look at, rather than something you see through,” says Steve Brodski, Sussman’s longtime writing partner. He says D.O.C. eyeglasses became “fashion accessories, with people buying four or five frames, (which) just completely catapulted the industry.”

Richard Golden and Sussman collaborated in the late 1980s on commercial work for Richard’s father, Dr. Donald Golden, and his eight area optical stores. After Richard took over in 1986, he turned to Sussman. “If Richard could, he would walk over to every single table at every single restaurant, take the glasses off people, and fit them with a new pair,” Sussman says. By the time D.O.C. was sold to Italy’s Luxottica in 2007, it had grown to 105 stores.

Brodski credits Sussman with creating “sale ownership.” Once he did a sale, no one else could take it. Scratch-and-dent sales have long been a staple of the industry, but it was Sussman who packaged it for Ollie Fretter of Fretter Appliance with the “Ollie Oops” sales. And no other retailer could duplicate the WOW sale — Wednesday Only Wow — from Art Van.

“He thinks like a consumer thinks,” says Art Van Elslander, founder and chairman of Art Van Furniture,  who was a Sussman client since 2009 before switching to another agency in August. “He is capable of getting inside of their head and knows things that work and things that don’t. The minute I got with Alan and his creative people, I knew that they understood.”

Even as many businesses have tightened their belts, there’s always room to grow for companies that resonate with consumers, says Florine Mark, president and CEO of Weight Watchers Group Inc. in Farmington Hills. “Our business has gone up every year since Alan’s been with our agency,” she says of the 15-year relationship. “What we want to do is let people know there is an easy, healthy way to lose weight and keep it off.”

She concedes, though, that the message doesn’t reach everyone. “We don’t talk about his eating habits, and I do everything I can every time I see him to get him to eat healthy,” Mark says. “I’m always telling him we want him around for the next 50 years, so he better eat healthy.”

Clients and those who have worked for him repeatedly remark that Sussman is “incredibly loyal.” He’s helped some through rough financial spots, remembers personal anecdotes, and cares about other people’s extended families.

Sussman grew up in Detroit “having no idea” what he wanted to do with his life. At 19, he dropped out of the University of Cincinnati, returned home, and bought a share of the Pioneer Recording Studio. His only reason for buying into the studio was so that his mother, Golda, and his father, Morris, a pharmacist, “wouldn’t be mad at me” about whether he had a job. Eventually, he says, “It changed the course of my life.”

Even though he was rubbing shoulders with some of the top musical acts of the day — The Who, Canned Heat, and Grand Funk Railroad — “we were starving to death” and living on money from the pop machine vendor agreement, he says.

It was at Pioneer, nearly 48 years ago, that someone asked Sussman if he could write a jingle. After finding out how much a jingle paid, Sussman quipped, “It’s funny you bring this up, because they call me Mr. Jingle.” The truth is, he’d never written a jingle in his life.

Sussman says he uses social media for some of his clients, but not for his own agency, because “we aren’t out looking for business.” Nor does he use any form of social media personally. “I don’t need to know what anyone else ate for dinner,” he says.

Many of today’s commercials produced by others infuriate him. “My No. 1 pet peeve? Every man in every commercial is portrayed as a moron,” blasts Sussman. “I always wanted to ask larger agencies why every commercial that’s on television has a moronic man who is a dimwit. I don’t write like that.” The impact, he insists, damages future generations who are growing up seeing “snarky” commercials.

“It’s part of our culture now and I don’t know why that is. I don’t get why being nice is so horrifying to Hollywood and to Madison Avenue. I don’t get it. I try to build people up and not tear them down.”

Asked about the popular cable TV drama Mad Men, and what it says about the advertising industry, Sussman doesn’t mince words. “We have a saying here and it’s important, ‘It’s not advertising until you sell something.’ Yet no one wants to be a salesman. They’d never make a glamour show like Mad Men if you are just salesmen — but I’ll be as clear as I can be, we are salesmen. And I’m proud of being a salesman.” db