Deep inside the Microsoft Technology Center in Southfield, Dave Sawyer (in photo below) reaches below a giant flat-screen TV that doubles as a desktop computer and removes a digital chip from a plastic sleeve. Immediately after placing the chip on the screen, a virtual menu forms around the device offering links to videos, blogs, and other applications that are stowed inside.

Sawyer repeats the procedure with a can of Red Bull. Setting it on the 40-inch screen, he watches as the tabletop computer creates a circle around the caffeinated beverage. By touching a section of the circle, Sawyer, a Microsoft technical director, can access promotional material, learn the temperature of the drink, or find out how much liquid remains in the can.

In the future, the system will alert waiters at a restaurant when they need to refill a cup of coffee at a corner table, when to clear the plates, or whether a frequent diner has any food allergies. Additionally, if a patron continues to talk long after their entrée is served, the waiter will be alerted to return and inquire whether the customer would like the food to be reheated.

Welcome to the next generation of computing, where Microsoft engineers are working to reinvent the way we live, work, and play. Instead of a traditional office equipped with a computer, a keyboard, and a mouse, the new Microsoft offering, called PixelSense (previously know as Surface), takes the workhorse of the digital age and packs it into one sleek desktop machine. In other words, your next computer is your desk.

PixelSense, retails for $8,500, and shouldn’t be confused with the tech giant’s tablet, now taking the name Surface, introduced in October. The latter device will share some of the attributes of its big brother, including touch-screen applications and the ability to run Microsoft tools like Word and PowerPoint, and it will have a high-resolution screen.

“If we wanted to visit the moons of Saturn, we just use our fingers to open a wider picture of the galaxy,” says Sawyer, who demonstrates by using both hands to open a digital image of the solar system on the larger Surface. Next, he taps the screen to open a virtual keyboard. Movie fans may liken the device to a scene from a sci-fi thriller.

With 26 technical centers across the globe, including 11 in the United States, why did Microsoft choose to locate one in Southfield? John Fikany, a Microsoft vice president who oversees the two-year-old, nearly 17,000-square-foot center, says the company placed a lot of faith in Michigan’s resurging economy following the 2008 global financial meltdown. “Michigan is a brain center, and we want to work with as many businesses as possible to develop new tools and new efficiencies,” Fikany says. “We’re like a think tank on digital steroids, and what we learn gets shared across the Microsoft landscape so our products meet the demands of businesses and consumers.”

Detroit isn’t often at the forefront of technological innovation, so why is Microsoft, the software goliath that long shunned hardware products like smartphones and tablets, betting big on Detroit and the state’s economic recovery? 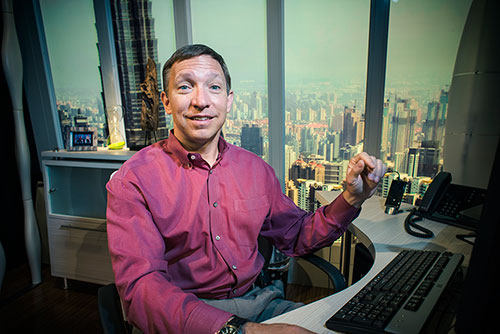 Trying to catch a second wind, Fikany says Microsoft is showcasing existing and future technology in a bid to create and grab more business, as well as to tap into the region’s digital knowledge base — including the Big Three automakers, health care organizations, manufacturers, universities, and logistics centers. “This is not a PowerPoint place,” he says. “This place is designed to build out applications.”

With an elite team of developers and creative tools, Microsoft offers companies a boot-camp curriculum of in-depth software customization through a process of strategy briefings, architectural design, and proof of concept — at no cost. So what can an existing or potential customer — about 200 companies are invited to visit the center annually — expect to encounter? By opening the doors to its own version of the Magic Kingdom, Microsoft’s team seeks to streamline a company’s digital offerings in a bid to boost revenue while staying abreast of fast-changing business trends. Naturally, one can’t help but gawk at the array of rarely seen Microsoft technology spread throughout the lab.

Visitors begin their tour by passing through a pair of glass entrance doors. On the right, a receptionist greets guests. To the left is a lounge that doubles as a collaborative lab. The piece de resistance is a 103-inch touch-screen TV mounted on the wall. The monitor is hooked up to applications such as Microsoft Photosynth, which allows a user to take a virtual flight around the world with just their fingertips. The screen glows with what can best be described as thousands of multidimensional images, and is connected to Microsoft’s Xbox 360 — which links to 66 million people — and a Microsoft Kinect motion sensor system that holds the world record as the fastest-selling consumer electronic device.

The components and imagery work so well together that racecar drivers use the system to practice their driving skills indoors during inclement weather, or between races. Other offerings include a personal avatar that selects clothes from the Web, tries them on for size, and confirms purchases and deliveries. Surgeons, meanwhile, can practice operating on virtual patients; no scrubbing needed.

Following a tutorial, Fikany leads the way past a server room visible behind a glass-curtain wall and into the Edison Design Suite where architectural design sessions are held. Over the course of one or two days, Microsoft will review and assess a company’s technological systems, study future digital strategies, and work to develop and implement solutions using, for example, Microsoft Cloud Computing.

After watching Google and Apple generate hundreds of millions of dollars selling hardware products, Microsoft is looking to elbow its way into the game. The collaboration centers are one way to get the word out about a dizzying array of products to be unveiled in the coming months.

Earlier this year, Microsoft designed a simple and sleek layout of its Bing search result page. The move was a harbinger of bigger things to come, including the projected arrival this fall of an integration of Bing and Facebook with the new Windows 8 operating system (Microsoft bought an equity stake in Facebook in 2007).

With Microsoft owning a 30-percent share of the U.S. search market in a partnership with Yahoo, Google will, no doubt, turn its head a bit.

It’s a major play that Microsoft hopes will mask past mistakes. In late June, the company’s online service division wrote down $6.2 billion in losses, largely attributed to aQuantive, an online display advertising company that Microsoft acquired in 2007. The company’s move into the social media space never worked out as planned.

The next move was more fruitful. The software giant acquired Skype in early 2011 for $8.5 billion. Responsible for 25 percent of the world’s international calls, the voice, video, and instant-messaging service is free for Skype users, while calls to cell phones and landlines cost extra.

Eager to strike a position in social media despite the earlier drawback, Microsoft acquired the social network Yammer in June. The offering provides for private communication within a company or a pre-designated group. Something else to look forward to later this year is the highly anticipated Windows 8, which Microsoft hopes to have on every new Windows-carrying device by Christmas. It has an aesthetically pleasing interface with colorful, live, metro slide touch-screen tiles that make browsing simple and fun. Plenty of other features are part of the rollout, as well. 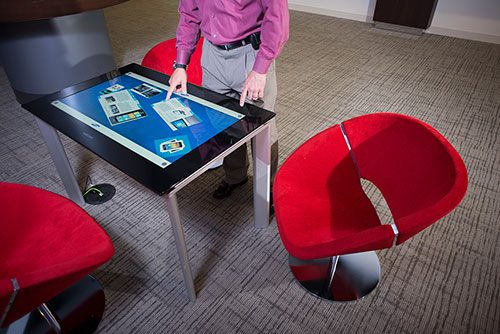 Moving through the center, the next stop is the Da Vinci Executive Briefing Center, where the walls are covered with white boards. Here, Microsoft’s staff and its partners lay out their plans of action to integrate strategic business objectives with technology-based solutions such as data management, business intelligence, and user experience design.

Following the strategy briefing, each individual project is presented in the Eleanor Josaitis Envisioning Center, named after the late civil rights activist who co-founded Focus: HOPE in Detroit following the 1967 riots. The dimly lit room is outfitted with a high-tech stage equipped with a large projector and flat-screen TVs, complemented by rows of tiered seats.

Here, Fikany and his team show off Lync, a communications platform that integrates with Microsoft’s Office products. Designed to diversify and create faster communication in the office, users tap one common interface to e-mail; instant message; share screen images; join audio, video, or Web conferences; and keep track of the availability of one or multiple users.

Lync can be used, for example, to instruct teachers in Africa via a sleek videoconferencing feature. It’s so easy to use that it takes more work to get up and grab a glass of water than to connect with a computer science teacher in Zimbabwe.

Matthew Mace, CEO of Blue Granite, a business intelligence consulting company in Kalamazoo (it has an office in Ann Arbor), has taken full advantage of the center. The company has hosted analytics workshops, strategy briefings, and training presentations for single users and groups of up to 20 people. “Clients tend to view Microsoft the way it was five to 10 years ago and are usually surprised about how high-tech they have become,” Grace says.

After developing and presenting software, the last area of the technology center is geared toward training. Hence, the Carver Room resembles a modern middle school computer lab equipped with dual-screened computer monitors. The side-by-side screens improve functionality while speeding up the learning process — someone can learn a new computing system on one screen and use the other screen to scroll through an instructional manual or other material.

There are also four development suites (named Henry Ford, Franklin, Newton, and Wright Brothers), where Microsoft developers educate clients in small teams. Several round tables are spread throughout the rooms, some equipped with a panoramic camera and a screen to improve video chatting.

David Bindschadler, chair of the math and computer science department at Lawrence Technological University in Southfield, says the Microsoft facility has been a digital oasis for students. Microsoft technicians have assisted students with project submittals for the Imagine Cup, one of the largest technology competitions of its kind, and Robofest, an annual autonomous robotics competition.

“Our students see how technology can be integrated into companies,” Bindschadler says. “It’s real-world experience. Microsoft has even helped arrange tech talks about mobile apps and other technology products. I can’t say enough about it.” db