From the early days of the Industrial Revolution, workers lived next to factories due to a lack of roads and public transportation. Not until the 1910s, with the wide availability of electric streetcars and the introduction of affordable vehicles in Detroit, did workers have the opportunity to live much beyond the factory gates.

Today, a different sort of factory is returning to the city’s neighborhoods. These new production centers, located in unused areas of schools that thousands of children once attended prior to suburban development, are being redesigned as business incubation facilities that offer job training, entrepreneurial classes, after-school programs, and active enterprises.

The catalyst for these modern factories is Chris Lambert, CEO of Life Remodeled, a nonprofit organization in Detroit that works with community leaders and an army of volunteers to transform downtrodden neighborhoods. Already, Lambert, community leaders, and local residents, along with more than 11,000 volunteers, have established transformative business and community ecosystems at Cody High School, Osborn High School, and Denby High School.

This year, Life Remodeled is in the process of bringing its most ambitious undertaking to the forefront: the transformation of the former Durfee Middle School, in the center of the city. The three-year project began last summer when 11,032 volunteers started renovating the school’s gymnasium, auditorium, and classrooms into an array of community assets, in addition to beautifying the surrounding neighborhood.

Due to a steady fall in enrollment and tight budgets, Durfee’s student body moved into neighboring Central High School. Along with the former Roosevelt Elementary School, which was torn down several years ago, the three schools were the first K-12 campus in the country when they were built in 1927.

During a recent tour, Lambert showed off an area where a Toarmina’s Pizza store will be opening this year. It will be operated by company personnel and local trainees, and it will cater to the neighborhood and nearby businesses. The goal is to train residents and students in how to operate a business — supply procurement, bookkeeping, management, marketing, and more — so they can take those skills and start other enterprises. 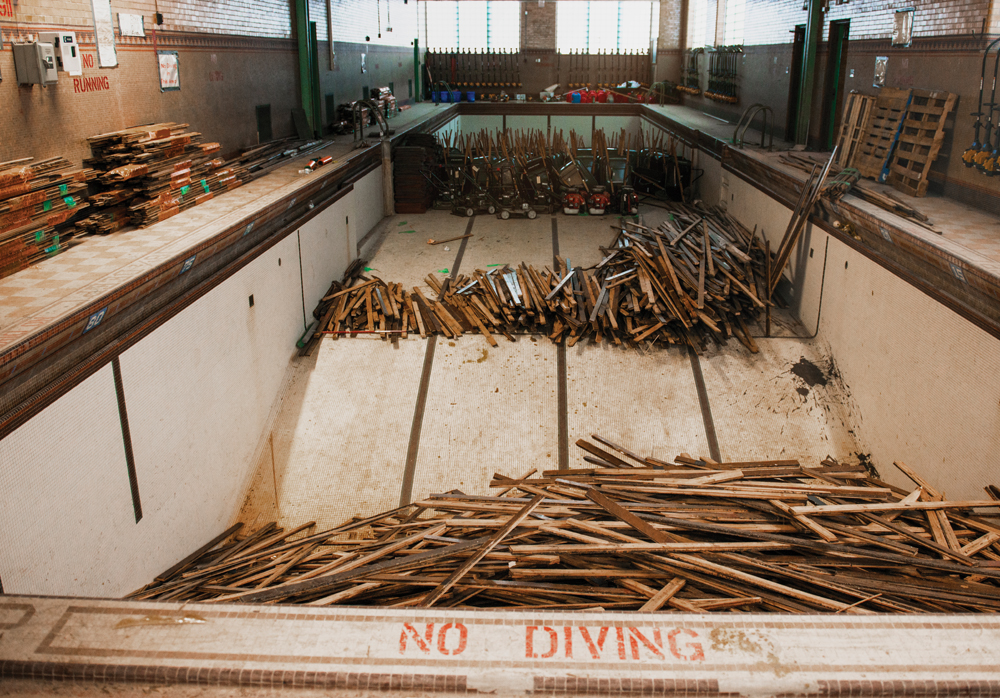 “We’ll offer skilled construction trade training areas, and we’ve already started as we convert the lighting system in the building to an LED system to lower our energy costs,” Lambert says. “We’re also switching to forced air heat from what is an expensive boiler system. We’ll have a maker space, a recording studio, music classes, computer classes from Sisters Code, reading classes from Beyond Basics, programming from Orion’s Quest, a farmers market, even a robotics area.”

While a typical Life Remodeled project takes a year of planning, including training community residents to operate the new facilities once the nonprofit organization leaves, the sheer size of renovating an entire school, now called the Durfee Community Innovation Center, required additional time.

“We couldn’t do these makeovers without the thousands of volunteers who come here for a week in the summer to repair or expand the facilities, board up vacant homes, clean the alleys, remove overgrown vegetation, and beautify the surrounding neighborhood,” Lambert says. “There are many, many companies that bring a handful or dozens of workers in to volunteer their time and services.”

This year, the annual cleanup at Durfee will be held Oct. 1-6, and will incorporate beautification projects in the neighborhood including the planting of thousands of trees and perennials, setting up rain gardens, and building park benches. Throughout the year, the organization is in need of volunteer skilled professionals to help with electrical, plumbing, flooring, painting, concrete repair, drywall installation, wood refinishing, glass installation, gutter repair, and carpentry. 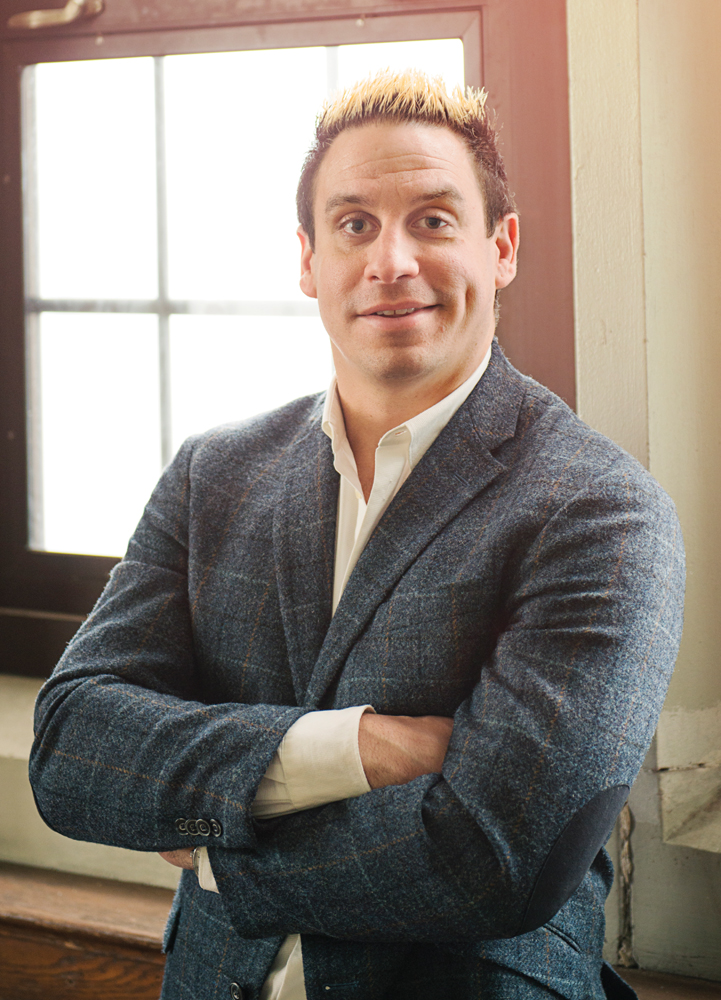 Lambert, a former pre-law student, says he traded his self-centered ambitions for the “radical new adventure of remodeling Detroit, one neighborhood at a time.” Following college, Lambert spent nine months in Liberia helping villagers build a well and a school — and battling malaria.

When he and his wife returned to the United States in 2007 and settled in Michigan, he launched Life Remodeled with the vision of sharing his overseas experiences with a broader community. From 2010 to 2013, the volunteer group built houses for needy families in five metro Detroit neighborhoods. Each house was constructed in six days, using donated labor and materials.

In 2014, Lambert decided to shift Life Remodeled’s focus to Detroit’s public schools. In August of that year, with 10,000 volunteers, he partnered with the Cody Rouge Community Action Alliance and other donors to build new STEM and medical simulation laboratories — along with a $1.2 million football field — at Cody High School on the city’s far west side.

A year later, 9,500 volunteers worked on projects in and around Osborn High School on the city’s east side. Their accomplishments included installing a new roof and a gym floor. Volunteers also boarded up 726 derelict houses and cleared debris from more than 600 blocks around the two schools. Lambert estimates the value of each project at $5 million. 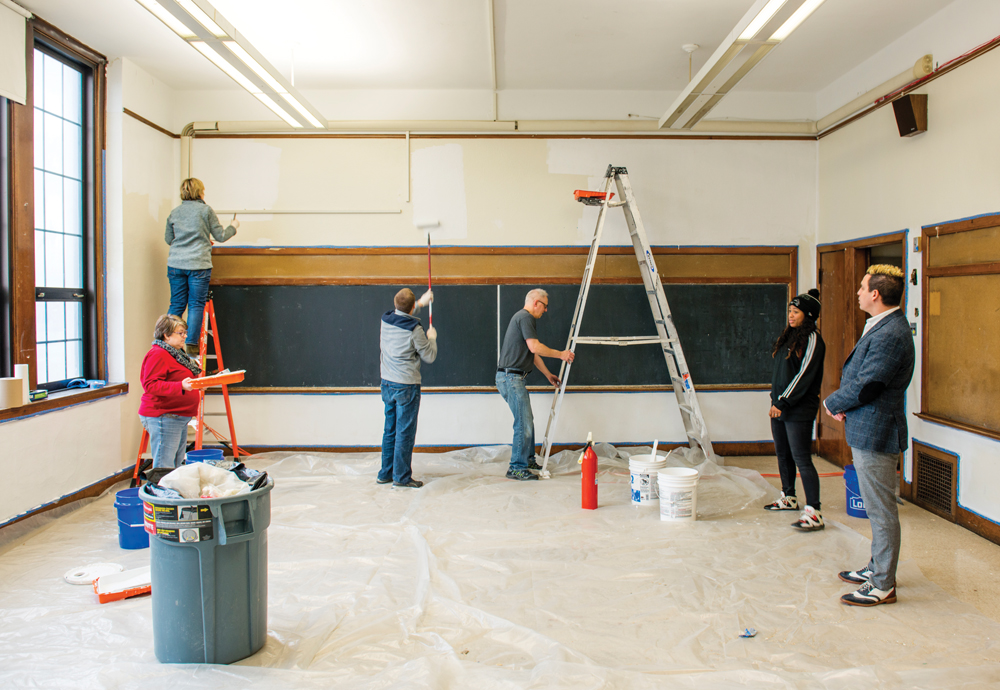 “In each community in which we invest, we look for two things: significant need and radical hope,” he says. “Our goal is to discover the community’s needs and vision, and come alongside and assist them.”

Lambert says Detroit Police Department statistics show that crime in the Cody Rouge neighborhood dropped in 10 out of 11 categories, including a 47 percent reduction in homicides, one year after the completion of Life Remodeled’s project.

In August 2016, more than 10,000 volunteers, including people from 200 businesses, installed landscaping, play structures, basketball courts, and a community center at Skinner Park, adjacent to Denby High School on the city’s east side. Valued at $1.4 million, the project was designed by Denby students.

Detroit Mayor Mike Duggan says Life Remodeled makes it possible for businesses and communities to work together. “It’s the kind of thing that government wouldn’t have been able to do, and now Life Remodeled has enormous credibility with the business community as well as the neighborhoods,” he says. “I wish there were five more Life Remodeleds.”