It was just three years ago that the state of Michigan completed sweeping changes to its laws governing energy markets. The 2008 reform, much welcomed by regulated utilities, did not completely eliminate the competition in electricity markets, but it capped — at 10 percent — the portion of the residential, commercial, and industrial markets that could buy power from alternative sources.

The signing of the bill by then-Gov. Jennifer Granholm was the culmination of a two-year process that involved input from the utilities themselves, as well as business groups and a variety of experts in the energy field. At the time, energy costs were relatively low, and the utilities welcomed the “certainty” that came from a large captive market, saying the law would allow them to make needed long-term investments in the state’s energy infrastructure.

The changes came about partially at the behest of a broad-based group called the Michigan Jobs and Energy Coalition, which believed the deregulated market put in place in 2000 did not work. That group, which remains in operation, advocates the continuation of the cap enacted in 2008.

But a lot can change in three years, especially when energy costs soar and a new administration — with a different mindset toward business and markets — takes the reins in Lansing.

Today, even with the 2008 law not yet fully implemented, a group of statewide business leaders is asking Gov. Rick Snyder and legislative leaders to reconsider increasing the limits on electric market competition. The Retail Energy Supply Association, a group of out-of-state energy marketers who compete for the 10 percent share of the market permitted by current law, as well as a group of 22 Michigan businesspeople operating as Energy Choice Now, spurred the inquiry. The organizations recently sent a letter to Snyder asking for his support in raising the cap to at least 35 percent.

Many of the companies involved with Energy Choice Now say because they were not among the fortunate 10 percent who were chosen to participate in the competitive market, they are at a disadvantage.

“We make custom-typed, very large pieces of equipment,” says Mark Butler, owner and vice president of finance and administration for Campbell Grinder Co. in Spring Lake, near Grand Haven. “We make anywhere from half a million to two million pieces, and it can take six months to over a year to build, and we have a lot of cost pressures and competitive pressures.

“Utility costs are one of the areas we look at [to save], and the government keeps putting more regulations on that,” he adds. “They squash free enterprise, and they squash the opportunity for a competitive environment. We’d like to be a monopoly, too, and every time our costs go up, I’d like to say, ‘Hey, we need a price increase.’ ”

D.J. Oleson, vice president of Oleson’s Food Stores in Petoskey, which operates five large grocery outlets, is frustrated that some of his competitors have been able to take advantage of electricity competition, while he has not.

“It’s on a very limited basis,” Oleson says of the restricted access to the open market. “So I’m on a waiting list, but they only allow so many customers to do that, and once it’s sold they can only buy so much electricity. Then it’s gone.”

Oleson is convinced that entering the competitive market would result in big savings for his company. “It would save me tens of thousands of dollars,” he says. “I can see it being a substantial amount that would result in more hiring, especially of seasonal employees.”

Steve Elsea, director of energy services for Leggett & Platt Inc. in Spring Lake, says the company has 140 production facilities globally and looks at each one as a profit center. Partially due to utility costs in the state, the company’s five Michigan facilities have a hard time adding to the firm’s bottom line.

“Comparing our facilities that are located in well-structured, competitive markets and those that are not, we’re saving, on average, about 15 percent on our electricity costs (in the former group),” Elsea says. “The ranges vary widely, and we’ve saved as high as 50 percent or more, but it depends on the contracts we structure.”

According to Elsea, energy is one of the company’s top three business costs, along with labor and raw materials. Due to of Michigan’s restrictions on electric competition, the company can do little to lower its costs.

“My job is to maximize the value of our BTUs, from the source behind the meter to the end use,” Elsea says. “Raising the cap would enable us to compete and buy third-party, which is what we’re doing in Ohio and Illinois — and we’re saving a lot of money doing it.”

Wayne Pedlar, general manager at Durcon Inc. in Canton Township, which produces laboratory-grade work surfaces, says the company spends $350,000 a year on electricity. He believes a truly competitive market would allow him to reduce that amount by $50,000 per year. “The other thing competition does is to bring more product offerings,” Pedlar says.

“With natural gas, I can structure my gas purchases any way that makes sense to me. I’m in control of the process when I buy gas, and I can take advantage of marketplace movements. With competition in electricity, I would have similar options available to me. The competitive suppliers are much more willing to take advantage of different product offerings, whereas with the regulated utilities, we have a Product A or a Product B.”

Pedlar acknowledges that he willingly chose DTE Energy in 2007, before the competitive limits were put in place, because it was the choice that made sense for Durcon at the time. Now, as dynamics in the market have changed, he wishes he had other options. But because of the 2008 law, he can’t take advantage of rates in the competitive market that he says are up to 20 percent lower.

While the members of Energy Choice Now are adamant, their path to success is strewn with obstacles from those who favor the current legislation.

The Michigan Chamber of Commerce, the Michigan Manufacturers Association, and the broad-based coalition known as Business Leaders for Michigan are among the groups that supported the regulated utilities in their quest to retain the existing 10-percent cap.

Jim Holcomb, the state chamber’s senior vice president for business advocacy, says the law passed in 2008 was the result of a long list of compromises among many stakeholders. “We certainly, at the Chamber, believe in competition,” Holcomb says. “But there has to be some recognition that energy markets are not just driven by who’s providing the service. It’s certainly an element of it, but you can’t just say open it up and it’s free.”

Holcomb and utility personnel argue that allowing more customers to buy from alternative sources would merely represent a shift, as the utilities’ costs would remain the same — meaning they would have to raise their rates to recoup losses from those customers who remained on their rolls.

“If you took it from a 10-percent cap to a 25- percent cap, it would be an almost $800 million cost shift,” Holcomb maintains. “That’s going to hit a lot of our members.”

The utilities say the primary justification for the cap is their need for “certainty” in the makeup of their customers and revenue base. Because the utilities need to make sizeable, long-term investments in energy infrastructure in the state, they can’t run the risk of more than 10 percent of their customer base fleeing.

“We think the cap is functioning exactly as it was designed,” says Len Singer of DTE Energy, the state’s largest provider of electricity. “The energy policy, as it was designed in 2008, reserved a 10 percent share for the energy marketers and, at the same time, that 10 percent gives locals like DTE Energy and Consumers Power the certainty they need to make the long-term investments that are necessary to serve all our customers.”

Singer also notes that before the cap was in place, customer demand of electric choice would go as high as 15 percent or as low as 3 percent, depending on energy costs at a given point in time.

Jeff Holyfield, of Consumers Energy, notes that energy markets, apart from the regulated utilities, only had 3 percent of an electrical market with no restrictions at the time the 10-percent cap was put in place in 2008.

“They had the regulatory structure they wanted for eight years (from 2000 to 2008), and how much of the market were they able to get?” Holyfield asks. “That’s primarily because it’s not about the structure. It’s more about what they’re after being linked to short-term market conditions.”

With the utilities and many major business groups unsupportive of raising the cap, the members of Energy Choice Now have yet to experience a major embrace of their position in Lansing. The office of state Sen. Mike Nofs, R-Battle Creek, chairman of the Senate Energy and Technology Committee, would only say that Nofs looks forward to reviewing the current laws to see how they are working, and that he would entertain testimony from various parties on the issue.

The path seems even more difficult in the state House of Representatives. State Rep. Kenneth B. Horn, R-Frankenmuth, chairman of the House Energy and Technology Committee, says he is not inclined to consider changes to the 2008 law.

“It isn’t my intent to open up the 2008 Energy Act prior to the full implementation,” Horn says. “The act won’t be fully implemented until 2013. A great deal of work and thought went into the 2008 act and the issue of market choice.”

Horn adds the changes represent the gradual elimination of a charge that saw businesses essentially subsidizing residential electric rates. “The law says that, by 2013, rates will be based on the cost of the service,” Holyfield says. “That’s a benefit to business customers because the businesses are already starting to see it.”

But increased electric competition has had its champions in the Legislature. Before he was term-limited at the end of 2010, then-Sen. Wayne Kuipers, R-Holland, joined with Rep. Roy Schmidt, D-Grand Rapids, to sponsor a bill that would have raised the cap to 20 percent. It went nowhere in the last session, and with Kuipers now out of office and Schmidt in the minority in the House, neither is in a position to lead such an effort — although Kuipers is lobbying on behalf of the cause.

In retrospect, Kuipers says he believes the increase he proposed was too small. “I didn’t like the idea of re-monopolizing the utilities,” Kuipers says. “I thought we would end up with problems later on, and the bill that I proposed was a fairly modest raising of the cap to 20 percent. I think, based on where we are right now, that number was too low. I think if you were to take a look at the number of businesses we have that are in the queue right now to take advantage if the number was raised, you probably are at, or exceeding, 20 percent already.”

But the utilities’ argument that they will face jeopardy without “certainty” in their customer base does not sit well with Elsea of Leggett & Platt.

“It seems like the utilities are always throwing out those kinds of scare tactics,” Elsea says.

“It’s happening all over. If you look at Pennsylvania and Texas, those two are models of well-structured electricity markets. A lot of people point to the problems in California, and will hearken back to the Enron debacle around 2000. But it was not a well-structured market, and it was doomed to fail because you had entities like Enron that were manipulating the market.”

Elsea says Illinois has also structured its electricity market wisely, such that Leggett & Platt has gone back and forth between the utilities and the energy marketers, and the utilities have succeeded at winning their business back after losing it. “It forces them to compete,” he says. “It works in other states. It can work in Michigan.” db 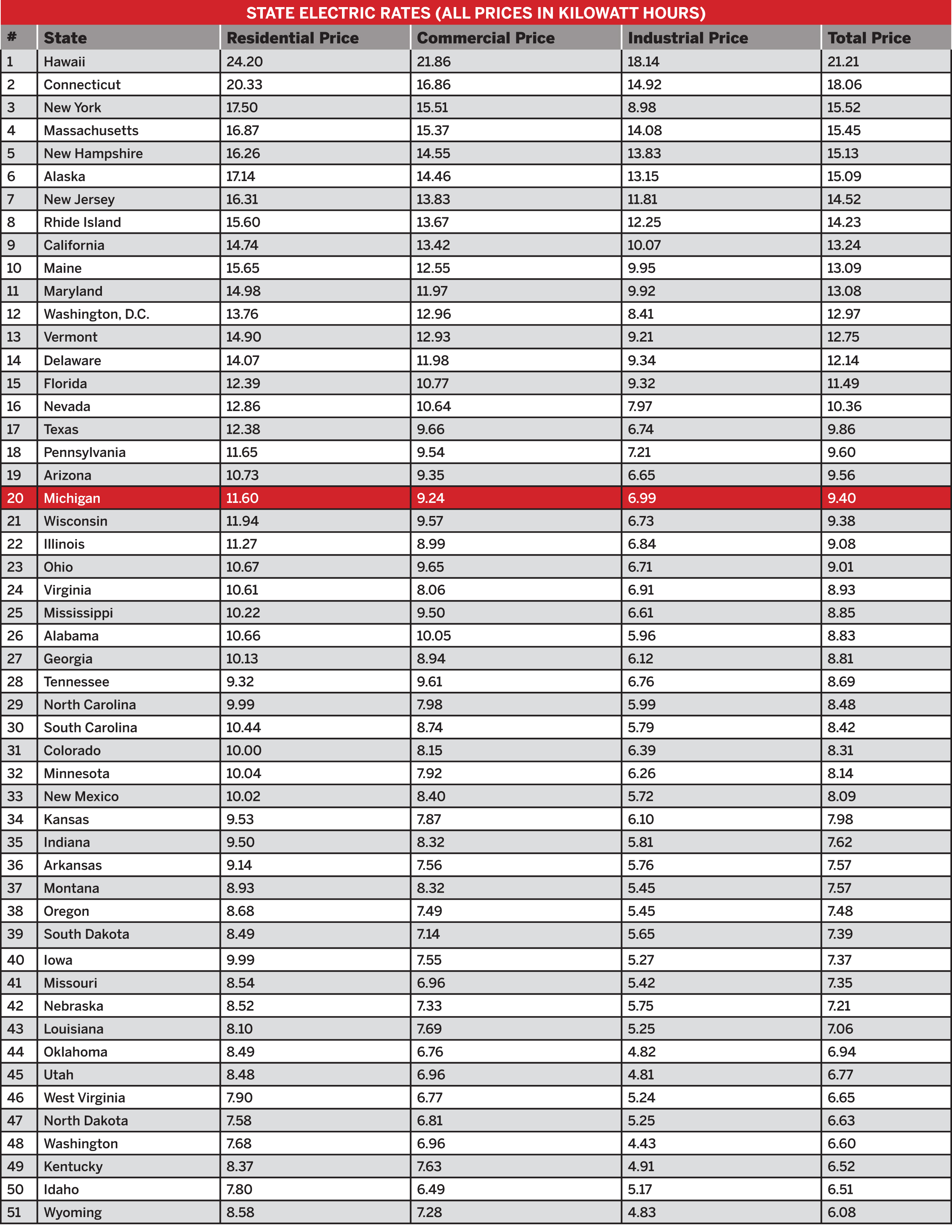