Eli Broad is the only person to build two Fortune 500 companies from the ground up, in two completely different industries and two different cities. And with a lifetime of accomplishments and memories to reflect upon, the one he cherishes the most is located in the place where he grew up. A longtime resident of Los Angeles, Broad was born in the Bronx in 1933, but when he was 6 years old, he and his parents relocated to the west side of Detroit, where they lived in an apartment at 14th and Pingree streets.

“The neighborhood was very nice,” Broad recalls, “and Detroit at that time was known as the Arsenal of Democracy. They were making bombers at Willow Run Airport (and) tanks on Mound Road, so it was very exciting what was going on. It was a vibrant city. You felt good about the role that Detroit was playing in providing what was needed — material and so on for World War II.”

Young Eli attended Thirkell Elementary, on the same street where he lived, then went to nearby Durfee Junior High, and moved on to Central High School, where he earned a reputation for being endlessly inquisitive. “The teachers didn’t enjoy me asking a lot of questions,” he says. “I thought I got a decent education there, but I really didn’t do as well in high school as I did in college.”

Broad, who at a young age toiled at an array of jobs, majored in accounting and minored in economics at Michigan State University in East Lansing. At various times he sold women’s shoes and garbage disposals door-to-door, and he also was a courier, delivering film for processing at a drugstore. He even had a stint at the Packard Automotive Plant on the city’s east side, where he worked as a drill press operator — a job that required membership in the United Auto Workers.

“I’ve always been, let’s say, pretty well-occupied with my time,” Broad says, “but I think it’s very clear that if you want to accomplish things and move ahead, and (you) come from a lower middle class family, as I did, you’ve got to work at it. I used to say, ‘the harder you work, the luckier you get.’ ”

With a partner, Donald Kaufman, and a $50,000 loan, Broad started Kaufman & Broad Home Corp. in Madison Heights. “We came up with the idea of building homes without basements,” he says. “Instead, we offered carports. That hadn’t been done before, and it was a great success from Day One. The houses could be built quicker, and we could offer a home that was several thousand dollars less than one with a basement, so what we did was unique.” 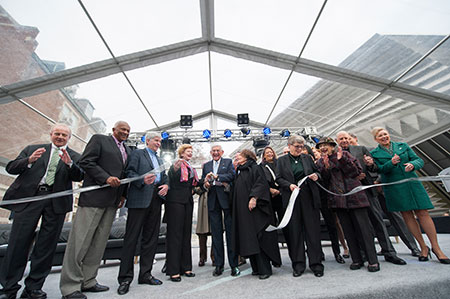 It was also the beginning of a wildly successful business model that the partners replicated throughout the United States and eventually overseas, and K&B Home ultimately became Eli Broad’s first Fortune 500 company. The second was a direct result of Broad’s concern that home-building, lucrative as it became for him, was a cyclical business. Concerned, he resumed his familiar process of studying and crunching numbers.

“I thought about what businesses did well during the Great Depression,” he says. “We studied a lot of industries and came to the conclusion that life insurance did very well — more so than banks, mortgage companies, retail, and so on. So we started looking for a life insurance company, and we found Sun Life Insurance Co. of America, a company founded in 1890 in Baltimore. Over the years, we changed it into a retirement savings company. That was a great success.”

Now 81, and at a point in his life where he is devoting himself full-time to philanthropy, Broad and his wife, Edythe, have donated an estimated $3.5 billion — more than half of their current net worth — through their family foundation. The foundation’s goal is to advance entrepreneurship in the arts, sciences and, in particular, public education.

“After we left the world of commerce,” Broad says, “the first thing I said was, ‘what do we do with all this money we have?’ And I thought from the very beginning that public education is something we need to get engaged in. We’re trying to prepare every child to be ready to go to college or find a route to a good-paying job. We want all our children to go to college, but they’re not all going. What happens is if they don’t see a route to a good-paying job, they just drop out of school. So we’ve got to do more in finding vocational education, whether it’s building trades, auto mechanics, whatever. We’ve got to do a better job of educating our kids.”

When it comes to the particular challenges facing public education in Detroit and Michigan, Broad hasn’t forgotten his roots. Over the years, he and Edythe have donated nearly $100 million to MSU and they’ve contributed millions more to Detroit’s public schools, most recently with their support of the Education Achievement Authority. In this program, more than 10,000 students attending 15 public schools in Detroit participate in a 7 1/2 hour school day, 210 days a year. The typical day in Michigan public schools is six hours, 180 days a year.

“We’re working with Gov. (Rick) Snyder and Detroit Mayor Mike Duggan,” Broad says. “We need a longer school day and a longer school year. We’ve got to use technology in the classroom and do a number of other things. We’ve got to improve the way we train teachers. It’s a big job, but it’s also a big opportunity.”

In other words, it’s the perfect assignment for a man who sounds as if he’s still very much in a big hurry, as eager and determined as that young boy all those years ago in the apartment on 14th and Pingree, driving himself toward a future not even he could imagine. db