When Roger Curtis was named president of Michigan International Speedway in 2006, the fastest track on the NASCAR circuit was coming off its largest expansion, including luxury suites, a Champion’s Club, and an expansive fan plaza. But there was one fact Curtis found troubling: Outside of race days, the track and the surrounding 1,400 acres of property were being used only 75 days of the year.

“We’d have these great crowds come in three times a year, and then we’d be empty for days on end,” Curtis says. “Our goal was to increase the number of non-racing event days, but how do you do that when you’re 80 miles from Detroit? There’s a lot of competition with major league sports, concert venues, casinos, theaters, culture, and the northern Michigan resort activity.”

Apart from adding more events, which doesn’t happen overnight given the logistics and long lead times in setting up concerts, festivals, food shows, and sponsors, Curtis worked on a more immediate concern. Due to a variety of factors, traffic jams before and after major events were problematic.

“I had been coming to MIS as a race fan for many years, and I could see traffic was a problem even then,” says

Curtis, who at one time studied nuclear engineering before switching gears to motorsports marketing in 1991. “It was a huge issue. We rolled up our sleeves with the Michigan Department of Transportation, and almost overnight we went from the worst traffic of all NASCAR tracks to the best.” 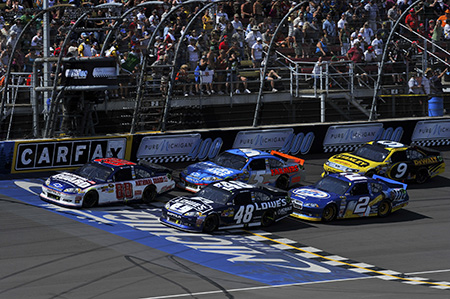 The track received a huge boost in 2010 when it hosted X Prize, a global competition of super-efficient vehicles all aiming to win $10 million in prize money. Curtis says X Prize opened the track up to more automotive testing, especially as it relates to R&D and autonomous driving.

“Auto testing doesn’t bring in a huge amount of money for us, but the overall marketing raises our profile,” Curtis says. “Otherwise that work would go to Ohio, Virginia, Texas, or California. Our wine and beer festival is now four years old, and growing. For concerts, we try to do two- and three-day events so that fans have a great lineup, and they can use our campground areas.”

As a result, MIS now offers a packed schedule with 237 non-race-day events — more than three times what was on the schedule eight years ago. Outside of holidays, the track hopes to offer a full year of activities in the next three years. To reach that goal, MIS recently completed $17 million in corporate hospitality improvements, including upgrading all 46 suites, which are located along pit row and above the grandstands.

The suites were designed with flexibility in mind — tables and chairs can be easily moved for a meeting before the race, and then reconfigured to provide optimal viewing. In addition, food and beverage selections were upgraded, and more experiences like visiting victory lane immediately following a race are offered.

In the campground areas, more space was opened up to luxury motorhomes and motor coaches, while a special area called the Apex was added so campers can view the race between turns 3 and 4. Located on the outside of the track, guests can enjoy water and electric hook-ups, concierge service, and other amenities.

“We are a Fortune 500 facility but we didn’t have a strong regional focus when I arrived,” Curtis says. “ We do now. Our annual economic impact is $300 million, and our goal is to be seen as Michigan’s hometown team.” db