For centuries, business leaders have been consumed by productivity and profit margins. Need proof?

Consider Larry Gardner’s German-built TIM calculating machine from 1895. It’s just one of 100 pieces in his unique collection of historic business accessories. TIM wasn’t a person; rather, TIM is an acronym for Time Is Money.

“One of my favorites is Hill’s Manual of Social Business Forms,” says Gardner, president of Lawrence Gardner Associates in Troy, a managerial financial consulting firm. Pulling the book from a shelf, Gardner peruses the 1886 tome. “You’ve got the financial history of the United States, passport and patent forms, even love letters,” he chuckles. “Can you imagine sending a form love letter?”

Gardner started his collection 25 years ago as a hobby. “The best places (to find collectibles) are little antique shops in the middle of nowhere, and the dustier the better,” he says. “That’s where I get most of my pieces. I attend auctions, but the fun doesn’t come from bidding. I like to examine items ahead of time, and look at and feel what I might bid on. Make sure to make friends with the auction house. They’ll tip you off to interesting artifacts in your field of pursuit.”

Gardner’s holdings include a rare 1939 Dictaphone, complete with a tortoise shell mouthpiece. “A few museums have called and asked if I would donate it, but it’s not going anywhere,” he says. “As I explained to my wife, a collector collects.”

There are also several slide rules made from ivory, including one that doubles as a moustache comb; a brass pneumatic tube; and a tin manual calculator — where the answers are provided free of charge by a monkey dressed in a red suit. The name says it all: “Consul the Educated Monkey.” 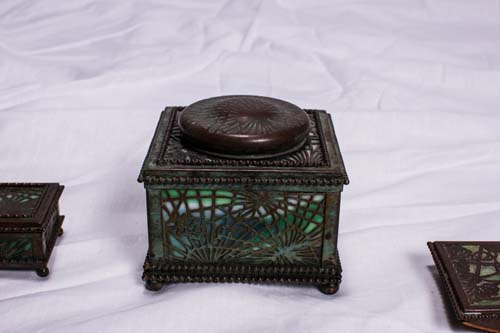 Other prized items are President Woodrow Wilson’s personal collection of desktop accessories, designed by Louis Tiffany — including an ink well, a blotter, a stamp holder, and a coin dish; and a Todd Visible Adding Machine from 1899, which has a nifty metal case that folds over and protects the unit during transport.

“It’s likely the first portable adding machine, so a clerk would travel from business to business, or merchant to merchant, to provide accounting services,” Gardner says. “There’s not too many adding machines around anymore, because many were melted down and made into weapons and munitions during World War I and World War II.”

Inside a wooden display case is his collection of 20 business card holders from the late 1700s and early 1800s. The pieces, fashioned from Mother-of-pearl, silver, ivory, and tortoise shell, originate from England, France, and the United States. Nearby are historic maps of the Great Lakes, including one from the 1700s.

“Check this cane out,” he says, reaching into a stand outside his office. “It’s a slide rule. You pull the black cylinder up and down to use it. Sorry, there’s no flask inside, but it would have been a great addition.”

A Cleveland native, Gardner spent time in Ecuador overseeing Latin American capital markets for a large bank, when his daughter became ill and he returned to the states. “It was one of those moments when you must choose based on your marriage, your family, and your career,” he says. “My wife was from Huntington Woods, so we moved here and I got a job working at City National Bank in 1971 (inside the Penobscot Building).” db