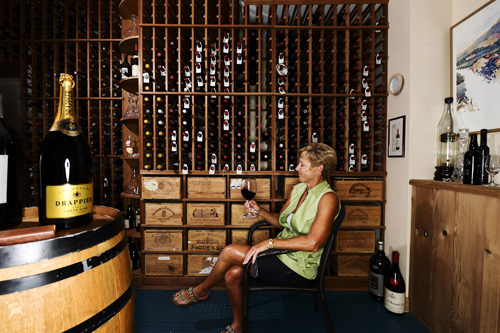 Judy Dunn’s home in Commerce Township is built for company. Vast windows overlook a deck reaching out to Union Lake, where Dunn keeps a pontoon boat and a ski boat. Inside is a jukebox, a movie screening nook, and a wine cellar holding 1,500 bottles. Dunn and her social circle frequently take advantage of the home’s festive feel, often gathering a dozen people around the dining table to share a meal prepared by a chef friend.

In the 1970s, while Dunn was attending school in Spain, she took to wine almost by default. “I had been a beer drinker, but the beer was warm and expensive, and the wine was cheap. And they were great wines, fun wines,” Dunn says.

Originally from Texas, Dunn moved to Detroit in the 1980s and began to collect wine. Working for Decanter Imports in Wixom, a company she later came to own, she spent a lot of time traveling to famous wineries, dining in prestigious restaurants, and becoming acquainted with industry leaders. For example, when Château Petrus owner Christian Moueix came to town, he stayed at her house.

Her travels, both with the company and outside of work, have taken her to the Bourdeaux region of France, Hunter Valley in Australia, and Mendoza in Argentina. Dunn says half of her wines are from the West Coast, primarily California, although some originate from Washington and Oregon.

A quarter of the bottles are French, and the remainder are from Spain, Italy, Australia, Portugal, and elsewhere. Her impressive 84-bottle stash of Château Mouton Rothschild includes vintages from 1945 to 2007. As for Michigan wines, Dunn likes Larry Mawby’s sparkling wines, as well as dessert wines from Black Star Farms.

Reflecting a more laid-back attitude toward collecting, Dunn’s cellar lacks a separate air conditioning and ventilation system to monitor temperature and humidity. She says the cellar’s location, in the home’s lower level, keeps the room cool and stable.

“Wine goes bad if it fluctuates really quickly. It can go up and down a little, and that’s not going to hurt it. Over the years I’ve had so few wines go bad,” Dunn says. “And I want my wine to age.”

Asked to advise beginning collectors, Dunn offers a quick synopsis: “Go to as many tastings as you possibly can, and discover what you really like,” she says. And drink with friends. 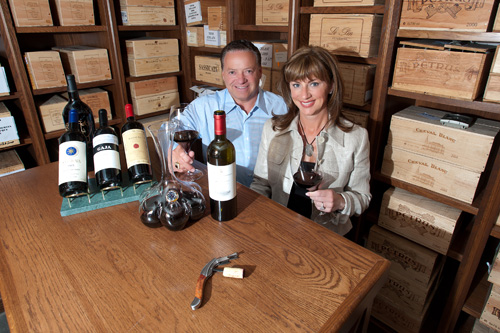 As a young boy, Tom Celani would accompany his Italian-born grandfather, Vincenzo, to Eastern Market to gather cases of grapes for winemaking. When the pair returned home to Detroit’s east side, they put the grapes through a hand press. “That’s where my passion started,” Tom says.

During those moments between grandfather and grandson, the seeds of a future wine-lover and vintner were planted. When Tom and his wife, Vicki, moved into a 1920s-era stone manor in Bloomfield Township in 2000, the estate had a Pewabic-tiled indoor pool and private access to Turtle Lake, but no wine cellar. They took this as an opportunity.

The couple, who have been collecting wine for 25 years and own Celani Family Vineyards in Napa Valley, spent nearly two years constructing their dream cellar — if the space, with its 16-seat dining table, cigar lounge, fireplace, and 5,000-bottle capacity can be called a cellar.

Their last home had a small cellar, and Tom says that people touring the room would often congregate there. Sometimes just the body heat of the guests could raise the old cellar’s temperature by 10 degrees, a fluctuation that could be detrimental to the wine.

In the new space, the bottles are stored behind panes of marbled glass in temperature-controlled passageways that line the dining area. One wing of the cellar is devoted to European wines, the other American — mostly California wines, some of them from neighboring winemakers in Napa Valley.

Aside from acquiring cases when they visit vineyards, the couple purchases wine at auction and from trusted purveyors who clue them in when a special vintage arrives.

Fittingly, the cellar has played host to numerous dinners, charity events, and tastings. At a benefit for the Children’s Leukemia Foundation of Michigan in 2009, the pair served up French wines as French chefs arranged food pairings. “It was one of those wine dinners that will happen once in your lifetime,” Vicki says. “That’s the great thing about wine; it’s meant to be shared.”

And the Celanis have a lot of special bottles to share. Among their collection are a Lafite Rothschild from the 1930s and dozens of bottles of Château Petrus, one a magnum from 1900. “There’s not a bottle here we wouldn’t open,” Tom says. “Sometimes it’s hard for people to pull that special bottle that they’ve been hanging on to for 20 years, and they’re waiting for that special moment. We happen to have a lot of those moments.” 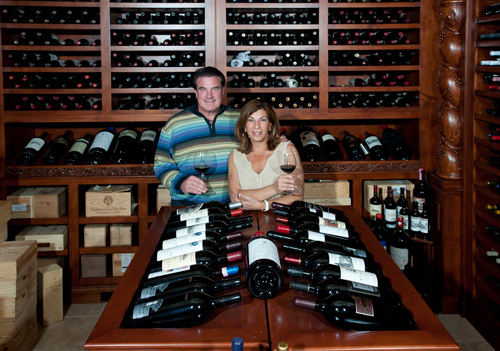 When Joe and Rosalie Vicari’s son, Dominic, was married in 2009, the couple took the opportunity to share their impressive 3,000-bottle wine collection with the guests. Joe spent days crafting the seating chart and evaluating what, and how much, each group of friends liked to drink. He then paired each table with a different selection of wines, allocating 10 bottles of super-Tuscans for one group, 8 bottles of Californians for another.

At a reserve wine bar, meanwhile, the couple served coveted Lafite Rothschild and Opus One. “People were mingling all night between the tables, saying ‘Oh, you’ve got Silver Oak, we’ve got Groth Reserve, let’s share,’” Rosalie says. “Our daughter is getting married in December, and we’ll do the same for her wedding.”

For the couple, owners of the Andiamo Restaurant Group, which operates 22 restaurants in metro Detroit, wine is always something to be shared. Their cellar, which Joe estimates to hold $400,000 worth of wine, serves to entertain not only their personal guests but also those in their restaurants.

“Three of the restaurants have pretty extensive reserve lists and they all pull from this cellar,” says Joe, gesturing to the ornate mahogany and slate room that adjoins the dining room in their Clinton Township home. “I try to give them vintages from ’99 or ’97, bottles that are now very hard to find.”

The cellar was built on the first floor of the home so that it could act as an extension of the primary entertaining space. Because the room doesn’t stay naturally cool and damp as a basement cellar might, it has its own cooling and filtration system. But even though the space was carefully arranged with frequent dinner parties in mind, the Vicaris still do most of their socializing at their restaurants, and it’s not unusual to see Joe lunching at Andiamo Grosse Pointe after golf with friends, or walking the tables at the Warren location, a bottle of rare wine in hand, pouring tastes for diners.

Joe, who started collecting in 1990 when he opened the first Andiamo restaurant, recommends that beginning collectors “buy the wines that you enjoy drinking.” Though many cellar owners pride themselves on their ancient French wines, Joe prefers younger Italian and Californian wines. He also consults authorities like Wine Spectator and Wine Enthusiast to evaluate which wines have good value, which will go up in price, which to serve now, and which to hold on to and let age.

Also in the cellar are bottles of Sicilian wine that Joe commissions exclusively for his restaurants. Five years ago, the Vicaris traveled to Sicily to visit relatives and came across a winemaker in the family’s ancestral town of Borgetto. The result is Andiamo Nero d’Avola and Andiamo Cataratto.

Whether their wine is commissioned from Sicily, served at home, set aside for special events, or shared with their restaurants, the Vicaris make it a point to conduct an inventory of their cellar every six months. The inventory includes an extensive spreadsheet with each bottle, quantity, and price listed.

“This way I won’t accidentally crack a $1,000 bottle of wine to drink in front of the television on a Tuesday night,” Rosalie says. 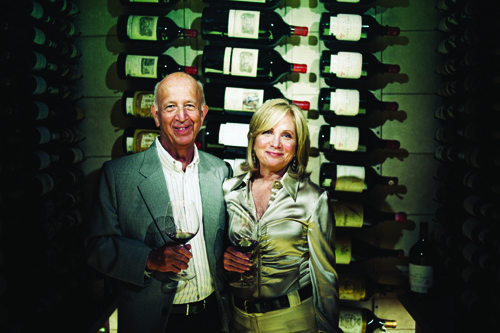 When Don Bailey and his wife, Cheri, put a three-story addition onto their Bloomfield Hills home in 2008, Don was initially planning to craft the lower level into a movie theater. But Cheri convinced him to build a wine cellar to house his already extensive collection.

“She decorated the whole house, but she gave me a free hand to do this,” says Don, who worked closely with architect Alex Bogart and the decorator to create what he calls a “Ralph Lauren feel.” He picked out the tile on the fireplace, the burl wood accents, the discrete cabinets built into the walls, and a commercial dishwasher that can clean glasses in 90 seconds.

The cellar manages to be both welcoming and luxurious. An elevator leads to the second floor and an expansive dining table is positioned in front of a wall of glass, separating guests from the Bailey’s 6,000-bottle collection. The bottles, which they track with a sophisticated barcode and scanner system that prints out vineyard details and tasting notes, range from champagnes and sparkling wines to Burgundies and Germans. Don says most of his collection is French; he recently gave away his prized bottle, a 1945 Lafite, to a friend born in that year.

Don started with a small stash of bottles in a kitchen cabinet he they moved into the house in 1978. In subsequent years, Don took cooking classes at a school and gourmet shop in Franklin. He quickly learned that his love of food naturally led to an interest in wine. The next step was to join a few wine clubs, attend tasting dinners, and meet fellow collectors.

These days, the Baileys host numerous events in their cellar, sometimes auctioning off a tasting or dinner for 12 to raise funds for Detroit Country Day School or Jack’s Place for Autism. For one tasting among friends, guests brought old bottles of Burgundy from their own cellars, and the group popped the corks and decided which were at their prime and which were over the hill.

“With experienced people that collect wine, no one is insulted if you tell them their bottle is not good. They value your palate and want to know,” Don says. “It is a community. There is a definite connection with wine collectors.”

Don certainly puts his cellar to good use, and when asked if he has any regrets about the project, he says, “That the room is done. It was a lot of fun to create.”