Billionaire businessman Dan Gilbert, who owns more than 80 downtown Detroit properties and has recruited more than 150 businesses to fill them, sees a gaping vacancy in the city that put America on wheels.

Gilbert has said on several occasions over the past few years that there should be an automotive museum downtown that would celebrate the industry and “leverage the sexiness of the car,” as he explained in a 2014 speech.

Terry Karges would like to help. Karges is executive director of the Petersen Automotive Museum in Los Angeles, which recently underwent a stunning, $90-million renovation that includes a spectacular red exterior trimmed in flowing, stainless-steel ribbons. It’s considered one of the finest auto museums in the country and could serve as a model for a similar endeavor in Detroit.

In addition to more than 300 cars, the three-story museum features a variety of interactive displays, including a video touch screen exhibit in which a Ford Motor Co. employee talks about the education and skills required for various jobs in the auto industry.

“We’d love to help in any way we can to build a museum (in Detroit),” Karges says. “It would become an instant hit, and you’d have people who come to Detroit from all over the world stop by for a visit. I think there’s a really good opportunity and I would be happy to talk to people.”

That’s not just the musing of a Southern California native who has little knowledge of the Detroit landscape. Karges spent 22 years of his professional career here, 17 of them as senior vice president of sales and marketing at Livonia-based Roush Performance, which makes high-performance automotive components for street and racing applications. He also has held marketing and management positions at Disneyland and SeaWorld.

Talk of a Detroit automotive museum accelerated in late 2014, when Gilbert purchased the 114-year-old State Savings Bank building downtown. Since then, however, no final decision has been made on what to do with the building, according to Robin Schwartz, spokeswoman for Gilbert’s Bedrock Real Estate Services. She also declined comment on any potential plans by Gilbert to establish an auto museum in Detroit.

Should Gilbert ultimately decide to undertake such a project, the Petersen Automotive Museum’s sweeping makeover is evidence that building a first-class car museum is an expensive, time-consuming endeavor. After five years of planning, California financier and museum Chairman Peter Mullin led a $125-million capital campaign in 2013 to pay for the renovation and establish an operating endowment. Virtually all of the money came from wealthy individuals, auto manufacturers, suppliers, and aftermarket parts producers. No public funds were used in building the museum.

To prep for the renovation that sought to create a world-class attraction, museum officials toured 30 auto museums around the world, including those operated by Maserati, Ferrari, Porsche, BMW, and Mercedes Benz. The facility was closed for a year for construction, and reopened late last year.

“In December, we had 37,000 people come through the doors,” Karges says. “That’s four times the number of the best month we had in the 20-year history of the museum.” Attendance this year is projected to reach 250,000, which he considers a conservative estimate.

Robert Petersen, the late publisher of auto enthusiast magazines including Motor Trend and Hot Rod, and his wife, Margie, founded the Petersen Automotive Museum in 1994 in a building that once housed a Japanese department store. It’s located on what is known as Museum Row, west of downtown Los Angeles.

Over the years, the museum became dated and attendance slumped, prompting its board to consider a dramatic overhaul. “Nothing had changed in 20 years,” Karges says. “Our attendance research showed that 70 percent of our visitors came here for the first time, which meant people weren’t coming back.” 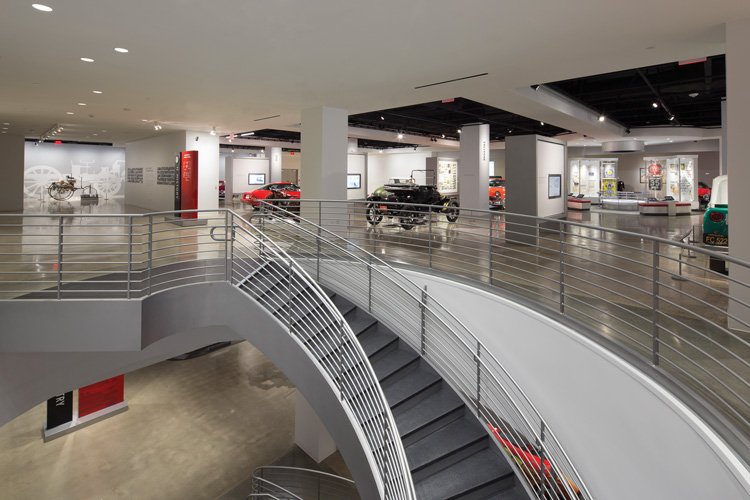 Even people who aren’t car fanatics might be drawn in by the renovated structure’s splashy exterior, just to see what the place is all about. New York-based Kohn Pedersen Fox, which designed the building, explains the twisting, stainless-steel ribbons draped over a red box were “inspired by the form of a car.”

Some say the design evokes California’s heritage of cherry-red hot rods. Others haven’t been so charitable. Curbed Los Angeles, a real estate blog, called it “the Guy Fieri of buildings: obnoxious, loud, and, ultimately, sure to be inexplicably embraced by the public.” A social media commentator said it was “the Edsel of architecture.”

But most agree it’s an attention-getter — and that’s the point, Karges says. “People drove by this building for 20 years and didn’t notice it,” he says. “It was an ugly box that didn’t matter. I defy anyone to drive by it and not see what’s here. It has transformed us. We are truly part of the landscape.”

Inside, the museum is organized into three themed floors with exhibits featuring automotive history, today’s industry, and the artistry of automobiles.

Visitors might think they’ve been transported to Detroit as they read about industry pioneers Henry Ford and General Motors founder Billy Durant, as well as modern-day luminaries such as GM design chief Ed Welburn.

Some of Detroit’s most iconic vehicles are on display, including a 1966 Ford GT40 racer; a 1954 “dream car,” the Plymouth Explorer by Ghia; and the EV1, GM’s first electric car.

Naturally, because of the museum’s L.A. location, there are numerous vehicles from Hollywood movies and television shows, including a 1982 Ferrari 308GTSi driven by Detroit native Tom Selleck and a 1979 Volkswagen van from the movie Little Miss Sunshine. Visitors to the museum can also watch students from Pasadena’s renowned Art Center College of Design create cars of the future in a glass-enclosed classroom space.

Metro Detroit has a number of auto museums and collections, including a historically significant display at The Henry Ford in Dearborn. Terry Ernest, president of the National Association of Automobile Museums, says there could be room for another venue in Detroit, particularly if it explains the colorful history of the domestic auto industry in a compelling way.

Karges agrees that telling stories of the industry and the vehicles it produced is key to a museum’s success.

“I think the obvious lesson is that people want to see a variety of displays and exhibits, but they want to hear the stories of the cars,” he says. “We have a black Chrysler Imperial … that’s a nice car. But when you hear that it was Katharine Hepburn’s car, it takes on a whole different meaning.”